How Does Diet Affect Behavior in Dogs?

Figuring out the optimal diet for your dog involves getting informed about ingredients as well as an understanding of how and when to feed your pet.
Picky eaters, excessive barking, loose stools, gassy tummies, mood swings, restless sleep, hot spots, compulsive disorders, reactivity, aggression, hyperactivity, and biting can all be symptoms of a poor diet.
Yet, until recently, the question of whether food can affect a dog’s behavior has been a long-debated subject amongst behaviorists and trainers. Fortunately, there is more and more evidence and study to show that what you put into your dog, can and does have an influence on how your dog behaves-just like what you eat can top or topple your own moods.
To avoid nutritional pitfalls, take time to do your homework. Start your research with a close look at nutritional models for humans. This avenue can help you to learn about better food choices that positively influence how humans behave, and as you will see, points to affect the way your dog behaves as well.
The Child Wisdom website has great information about how food affects human children. The following is noteworthy since many of the problems revealed here are the same problems routinely mentioned when counseling pet parents about their dog’s erratic behaviors: “Food Sensitivities/Allergies – Some people get depressed or behave irrationally after they eat (often unknowingly) something to which they are sensitive or allergic. This phenomenon sometimes called a “brain allergy” has been widely reported and sometimes appears in patients who display mental health symptoms. True classic food allergies involve an antigen-antibody immune response (IgE-mediated) and are relatively rare. About 5% of children and about 2% of adults are reported to have these “true food allergies.” In contrast, food sensitivities, sometimes called food intolerances, are reported by almost 25% of Americans. Usually missed by traditional antibody blood tests, these food sensitivities are most often identified through elimination. (If a symptom disappears when all sources of certain food are eliminated from the diet for several days and then reappears when that food is reintroduced, the symptom is likely to be related to sensitivity to that food.) Any food may cause a reaction, but the most commonly reported food sensitivities involve wheat gluten, dairy products, yeast, corn, eggs, soy, grapes, oranges, chocolate, and synthetic food additives.”
Looking at human models can offer interesting comparisons; however, watching dogs in their natural habitats is truly revealing. As of late, the behavior community is trying to understand more about the innate behaviors of dogs, including their eating habits: Dogs scavenging in trashcans, dumps and other locations of “plenty” are all very common-not hunting, as was believed for many years. The small amount of hunting these feral dogs do is mostly comprised of catching lizards, small rodents and birds.
Dogs are classified as omnivores, eating both plant matter and meat, but based on field observations; scavengers might be the more fitting description of their dietary practices. It’s no wonder that dogs will eat just about anything you put in their bowls! Still, just because most dogs will eat whatever you put in their bowl, doesn’t necessarily mean it’s good for them — or nutritionally sound.

Feeding to behavioral health – What’s in your dog’s food bowl?

As pet parents and providers, it’s important to give active thought to what you feed your dog since different foods will lead to different results – not just medically but behaviorally as well.
According to many veterinarians and behavior experts, we are producing future generations of health and behavior problems for dogs by feeding overly processed, chemical and dye-laden commercial dog foods that appear wonderful to humans, but often have nutritional deficits and long-term toxic effects.
In part, the problem starts with the companies producing many of the popular name brands of food. In the January 2003 issue, the Whole Dog Journal made this statement: “Mostly, the giant companies, corporate cousins to the human food manufacturing industry, serve (partially) to spin figurative gold out of the “straw” leftovers from the human food side. The human food processors use the good parts, and the food fragments that would otherwise be wasted are put to good use in pet foods. The result is a consistent, inexpensive, but not particularly healthy food that is readily available anywhere in the country.”
To further make the point, consider this: “The “whole grains” used in many dog foods have had the starch removed and the oil extracted (usually by chemical processing) for vegetable oil; or they are the hulls and other remnants from the milling process. If whole grains are used, they may have been deemed unfit for human consumption because of mold, contaminants, or poor storage practices” (The Allergy Solution for Dogs, Messonnier, D.V.M., p.156)
Another problem is corn. Used as a protein source to save money in many popular foods, corn presents a completely different set of difficulties for dogs suffering from behavior issues, or stress-related problems: “A common protein source in dog food is corn. Corn, however, is unusually low in tryptophan and represents some risk to animals sensitive to serotonergic under activity.” (The Canine Aggression Workbook, O’Heare 2000, p.215)
Serotonin is what keeps dogs well balanced and helps to control moods, arousal, and sensitivities to pain, sounds, and touch. It is also the major component in healthy sleep/wake cycles. An imbalance of serotonin can cause sleep problems which frequently exacerbate behavior problems during times when your dog is awake; thus making training or modification that much more difficult. Many behaviorists now recommend the complete elimination of corn in the diet because of this problem. It’s always better to start out with an even playing field to ensure that your dog’s diet is not creating any underlying problems that could make living with your dog more difficult.

How Does Food Affect Dog Behavior?

Author and behaviorist Bill Campbell (Behavior Problems in Dogs, 3rd Ed., 1999) believes that the high-carbohydrate, (junk carbs, not complex carbs) ingredients found in many commercial dog foods are directly related to problems such as hyperactivity and hypersensitivity to normal stimuli in everyday life. Campbell points to the fact that there has been a little study done on dogs in this area, but that there is some pro-carbohydrate information to be found, even though it is a well-known fact that dogs do not need any carbohydrates at all to survive. Campbell discounts the studies by saying, “We must bear in mind that most of the studies you may have read on this subject, if not all of them, may have been funded by high-carbohydrate diet dog food manufactures” (Webtrail, April 1999).
What we do know is how junk carbohydrates and junk food affects humans, and it doesn’t take much of a leap to believe that products affecting our behavior or moods, also affect dog behavior. According to Prevention Magazine, (September 2005; pg. 77), recent studies have linked together higher homicide rates and omega-6-fats. Omega-6-fats are found in corn, safflower, soybean, cottonseed and sunflower oils. Murder rates were 20% higher in countries with the highest intakes of omega-6. It is believed that the “Western diet” may overwhelm omega-3’s which are known for their calming effects.”
Edmund R. Dorosz, BSA, DVM also believes that dog food can cause hyperactivity and unusual behavior patterns in dogs. In a NetPets article, he states: “We hear of many dogs today being allergic to meat. Beef, pork, lamb, chicken, and other meats are being fingered as the culprits. This is something hard to believe, for a species that has been carnivorous for millions of years to be now allergic to meat. Maybe it’s something in the meat or in the ‘complete and balanced’ diets that are foreign and new to our dogs that are causing the problem” (“Heredity and Environment – What Role Does Nutrition Play?” www.netpets.org, 12/14/02).

What to do with this information? 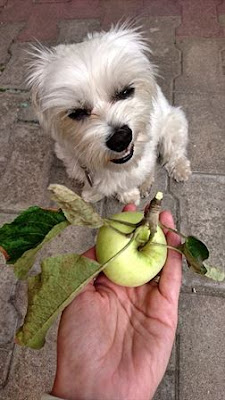 How much and when to feed your dog?

When to feed your dog is just as important as what you feed. No longer is the standard once a day feeding used, neither should dogs be free-fed — food left down all day for them to nibble at will — unless there is a medical reason. Just think about how you would feel (and look) if you were only able to eat once every 24 hours, or kept nibbling on a high-calorie food all day long!
The ideal regimen is to feed an adult dog two-three times per day. Glucose levels are greatly affected by food (the same as in humans), so it is important to feed regularly to prevent these levels from becoming erratic as they increase and decrease respectively for those dogs that only eat once a day, or nibbles his food at will without access to expend the on-going energy made available by snacking all day.
As a real bonus for your dog, try feeding in food-carrier toys such as Kongs, or Buster Cubes as a way to provide mental and physical exercise (much like dogs in the wild, working to find their food). These are great for those dogs that like to take their time eating. These “food puzzles” will also help slow down those dogs that “vacuum” their food from the bowl in 30 seconds and then have nothing to look forward to the rest of the day.

Whether it is dry kibble, canned, raw, freeze-dried, or a combination of these, it is essential to do your homework when choosing food for your dog. Try different brands and find several your dog likes so you can switch around since there is now more evidence that it’s healthier to change between several brands of food rather than feed the same for a dog’s lifetime.
The bottom line is you should read the ingredients and feed your dog healthy foods to achieve good mental and physical health for the duration of your dog’s life.
Consider also reading: Chronic Renal Failure In Senior Cats and Dogs
References:

Exotic Bird Insurance – Why Should You Get a Bird...