Vetsimo | The objective of Vetsimo is to help, assemble veterinary lovers from all around the globe and offer valuable data with fellow members.

Endocrine Disorders in Dogs and Cats

The endocrine system is composed of glands that secrete hormones directly into the bloodstream. These hormones regulate and control many of the body’s metabolic processes. While disorders of the endocrine system are relatively rare in dogs and cats (with the exception of diabetes mellitus) they can lead to severe, sometimes fatal disease if unrecognized. Early identification can many times reduce the need for prescription medications and some disorders and their associated symptoms are amenable to various alternative therapies. Additionally, many experts believe that proper diet and nutrition including high-quality supplements can reduce the incidence of certain endocrine disorders.

In this article, we are going to discuss the most common endocrine problems dogs and cats may face: Hyper- and Hypothyroidism and Hyper- and Hypoadrenocorticism. Diabetes is covered in-depth in a separate article.

A gland is a collection of tissue whose function is to secrete hormones into the bloodstream. Each gland secretes one or more unique hormones, and each hormone has one or more specific functions. Hormones produced by some glands regulate the production of hormones by other glands. If this is a little confusing to you, don’t worry. We’re going to keep things simple!

The pituitary gland is located at the base of the brain and is sometimes called the master gland because it secretes hormones that control and regulate many of the other glands in the body. If it malfunctions, then the glands under its control may secrete too much or too little of their hormones, which then results in symptoms of the particular condition. The hypothalamus is a part of the brain that secretes hormones that control some of the functions of the pituitary gland. For our purposes in this article, that’s all we need to know about the hypothalamus.

Thyroid hormones are metabolic regulators and are necessary for the proper control of many bodily functions. Thyroid hormones assist in the regulation of digestion, heart rate, skin texture, and hair growth, mood, and maintenance of proper weight. Different sets of problems can arise if the levels of thyroid hormones are too high, or too low.

Hyperthyroidism is usually caused by a benign tumor in the thyroid gland. This extra growth of thyroid tissue is not controlled by the normal feedback system that regulates hormone production and the tumor constantly secretes thyroid hormones.

The most common sign of hyperthyroidism is weight loss despite an increased appetite. Other signs are:

Hyperthyroidism is usually treated in one of two ways. One treatment is to surgically remove the tumor. The other treatment is oral administration of radioactive iodine. The iodine accumulates in the thyroid and destroys all of the glands, the tumor, and normal thyroid tissue. The patient is then treated with oral replacement of thyroid hormone. Animals (and people) do very well with this form of treatment. 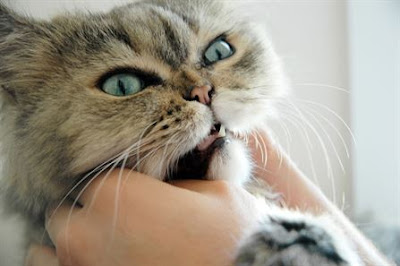 Hypothyroidism is a decreased production of thyroid hormones. This condition is very rare in adult cats (unless they have had hyperthyroidism treated with radioactive iodine). It is, however, a relatively common disease of dogs. It affects both males and females of any age, though its incidence increases in older dogs. It is rare in dogs less than 2 years old. Hypothyroidism is increasingly being recognized as a cause of new aggressiveness in older dogs.

Conventional treatment of hypothyroidism is an oral replacement of the thyroid hormone. If the decreased function is the result of an underlying medical problem, such as an autoimmune disease, then this must also be addressed.

Adrenal Hormones and their Functions

The secretion of hormones from the adrenal glands is controlled by a complex interplay between hormones produced by the pituitary gland and other glands in the body.
As with the thyroid, a different set of problems arises from increased or decreased production of adrenal hormones.

Hyperadrenocorticism is the result of excess secretion of glucocorticoids. It is commonly called Cushing’s syndrome. It usually occurs in middle-aged and older dogs and affects males and females equally. Poodles, small terriers, and dachshunds appear to be predisposed. HAC is uncommon in cats, but when present usually occurs in middle-aged and older cats, and is more common in females.

The most common cause of HAC is small tumors of the pituitary gland that secrete excessive amounts of adrenocorticotrophic hormone (ACTH). ACTH is the hormone that stimulates the adrenal glands to secrete cortisol. Tumors of the adrenal gland can also directly produce increased amounts of cortisol. As with the thyroid, these tumors are not under control of regulatory hormones and produce cortisol constantly.

The most common signs of HAC are increased thirst, urination, and appetite. These are also the common signs of diabetes mellitus, and in fact, diabetes is present in 80% to 90% of animals with HAC. Other signs include:

Treatment of HAC depends upon the cause; however, in many cases, surgical removal of the adrenal glands with the subsequent daily oral replacement of their hormones is recommended.

Hypoadrenocorticism is a decrease in hormones produced by the adrenal cortex (cortisol and aldosterone). It is often called Addison’s disease. It is most common in large breed dogs but is seen with increased frequency in bearded collies, spaniels, and standard poodles. It is most common in animals around 3 to 4 years old but can occur in seniors. The disorder is relatively rare in cats.

The disease is usually caused by autoimmune destruction of the adrenal cortex, though damage to the pituitary gland that results in a decrease of ACTH can also cause Addison’s disease. Because cortisol and aldosterone are critical for maintaining many of the body’s regulatory functions, their rapid decrease can present as an acute emergency with the collapse of the body and unconsciousness.

The disorder, however, usually presents slowly with lethargy, weight loss, and decreased appetite. Other signs include:

Conventional treatment is the daily replacement of cortisol and aldosterone.

The list below summarizes the relative frequency various endocrine disorders are seen in dogs and cats.

Diabetes
Common in Dogs and Cats

There are many other endocrine diseases with a host of causes. These are rare in dogs and cats and are mentioned for completeness.

Diabetes insipidus is a deficiency of pituitary production of vasopressin (ADH) or a decrease in the kidneys’ response to ADH. (This is a completely different disease than diabetes mellitus, the disorder of glucose metabolism). ADH is the hormone that signals the kidneys to reabsorb water. A lack of ADH causes the kidneys to produce large amounts of urine. The production of urine causes the individual to drink large amounts of water. Because minerals are also lost in the urine, the blood eventually becomes dilute and the individual or animal can lapse into a coma and die.

Acromegaly is caused by excessive secretion of growth hormone by the pituitary gland. It results in abnormal enlargement of certain bones and organs. 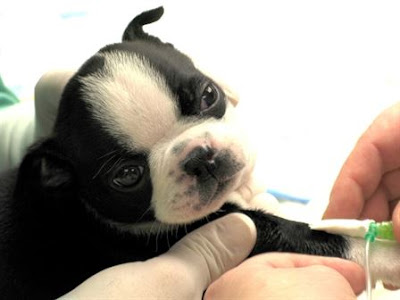 The various endocrine disorders have many signs and symptoms in common. While a thorough history and physical exam by your holistic veterinarian is the first step to evaluating any problem, the accurate diagnosis of endocrine diseases is made by blood tests that measure the levels of various hormones. As we’ve seen, the regulation of these hormones is complex, and sometimes in order to make the diagnosis blood has to be obtained at set intervals, or at set times after a medication that stimulates one of the glands is given. Your holistic vet will explain in detail what may need to be done for an accurate diagnosis.

While the mechanism whereby an increase or decrease of a hormone leads to certain symptoms is understood for the disorders we have discussed, little is known about the underlying causes that lead to over- or under activity of the glands. For example, little is known about what causes a pituitary tumor or an autoimmune attack of the thyroid or adrenal gland.

Though links have not been proven in all cases, many experts find associations between autoimmune diseases and poor nutrition, environmental toxins, and food preservatives. These experts stress the importance of proper nutrition and minimizing the ingestion of chemicals and synthetic preservatives.

Unlike diabetes, which can be prevented in most cases with proper nutrition, diet, and exercise, there are no clear-cut measures to reduce the risk of other endocrine conditions. However, proper diet and nutrition and the use of natural rather than synthetic supplements and preservatives will boost the immune system and keep the body in the best health possible.

The Wholistic Pet Canine Complete and Feline Complete are the first totally organic, human-grade supplements that provide your pet with a complete array of vitamins, minerals, enzymes, essential fatty acids, antioxidants and digestive microflora in an all-in-one easy to feed formula. They contain no synthetic compounds, and among other wonderful health benefits boost the immune system. Also excellent for overall health and well-being and as an immune system booster try The Honest Kitchen Invigor or Animal Essentials Green Alternative.

Alternative treatments for endocrine disorders include herbals, flower essences, homeopathic, and detoxification. As with any condition, early recognition and treatment reduce the severity of the disease and assists any treatment used. Even if conventional medications are necessary for your companion, the addition of alternative modalities can speed recovery and reduce unpleasant symptoms.

The symptoms of Cushing’s syndrome and support of organs affected are frequently treated with dandelion root, burdock, garlic, and nettle. For support of the adrenal glands in Addison’s disease, borage leaf and licorice may be useful.

Herbs that support the immune system include astragalus, garlic, licorice, and Siberian ginseng.

The definitive resource for using herbs to treat our companion animals is, All You Ever Wanted to Know About Herbs for Pets, by Mary Wulff Tilford and Gregory Tilford. An incredibly comprehensive review of the history and uses of herbs, it also has an eye-opening chapter discussing nutrition.

Glandulars are extracts of animal organs, including endocrine glands, which contain the hormones associated with the gland or organ. Because glandular is made from the whole organ they also contain other substances present in the organ or gland that have not been identified or isolated. Glandular therapy dates back thousands of years and was used by the ancient Egyptians and Greeks.
The objective of glandular therapy is to stimulate renewed, vigorous, and healthy activity of aged or diseased cells by providing natural cell stimulators found in the tissue of the organ or gland. Even trace amounts of these stimulators are sufficient to promote the growth of a diseased gland or organ. Glandulars are powerful preparations and should be used after consulting your holistic veterinarian.

The diagnosis of endocrine diseases is complex and requires a trained and knowledgeable holistic veterinarian who can interpret overlapping signs and symptoms and complex laboratory tests. While endocrine disorders can be severe and life-threatening, most can be treated safely and effectively with conventional and alternative treatments. Though long-term medications are usually necessary, your companion can remain vigorous, healthy, and active well into their senior years.

You can also check our article about colitis and bowel disease in dogs and cats.